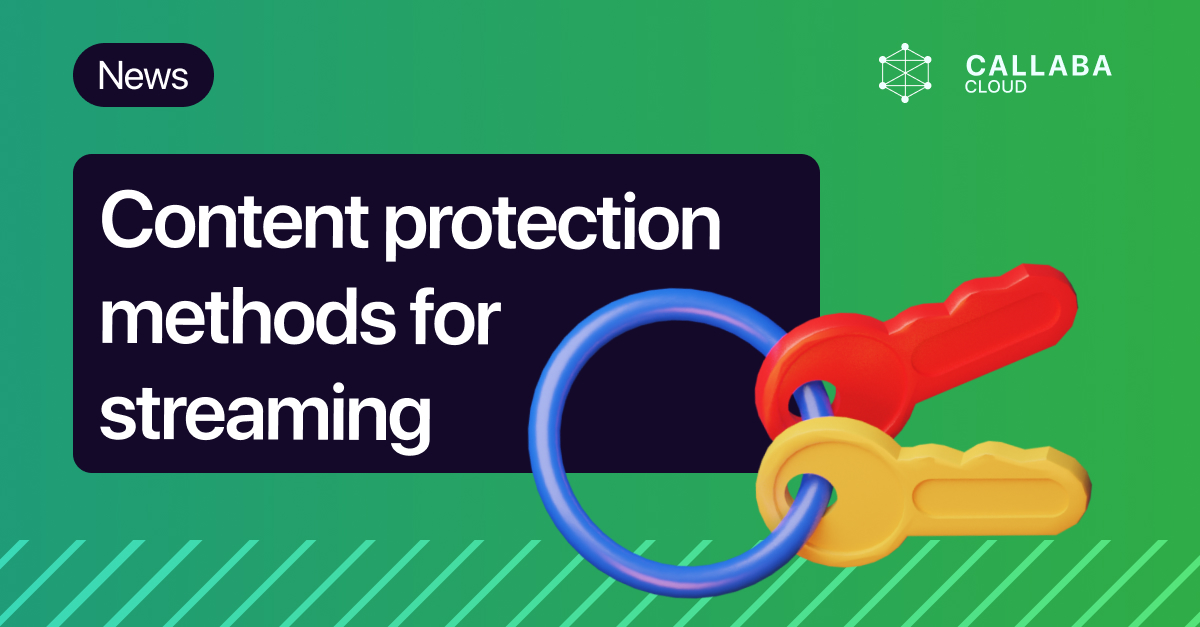 When a service works well, the user does not notice its operation. Today, any of our hobbies are analyzed by large systems, and algorithms adjust all incoming information so that it is tailored to what we like.

The Internet has expanded our possibilities. We can watch anything, anytime, anywhere.

No need to set an alarm so you don't miss your favorite program. If you miss the livestream, a recording will be available anytime.

Despite this, we continue to watch live. With some things, magic gets lost in the recording.

Take a sports broadcast that includes a million fans at once. All of these fans cause a tremendous load on the equipment, which makes high-quality transmission difficult.

Nevertheless, the viewer should not be aware of all these complex technical processes.

To compete in this market, companies need to provide the user with a choice that is simply convenient for them to make.

Ideally, the viewer won't even notice that this is a remote broadcast due to its reliability.

Investing in critical IT infrastructures, telecommunications and broadcast technologies is just as important as physical security.

Because any failure, cyber attack or content theft entails damage to the reputation and loss of revenue.

In recent years, the war of copyright holders against illegal copying has been waged not only with the power of law, but also with the help of technical tools that are being introduced into products.

Nevertheless, we know that almost any software can be found on the internet for free or much cheaper, in the form of merged copies.

Therefore, a number of questions arise:

How content was protected from piracy in the past

With the advent of copying possibilities came the need to protect labor from theft.

In the 70s of the last century, the first household recording tape recorders from Sony appeared on the market. The movie company Universal was not very excited about this. It turned out that anyone can rewrite a film onto a cassette and sell it.

So they filed a lawsuit against Sony demanding a total ban on home video recorders.

But the court sided with Sony, recognizing the right of users to watch whatever they want at any time for private viewing.

In addition, it was impossible to rewrite a film from cassette to cassette without losing quality. So this film copy was not suitable for mass screening.

Then came computer games that could already be rewritten without loss of quality from tape or floppy disk. Hence, developers were facing a risk of losing profits.

So, to combat piracy, a license code appeared, which is still used today.

Other original ways to fight piracy

In the 80s, the LensLok system appeared. It protected games and programs such as the ZX Spectrum and Atari 8-bit.

This system came in a package that contained a plastic holder containing the lens. To play the game, you had to see the code on the TV using the lens, and enter the code at the start of the game. But if your TV had a large diagonal, then this system did not work there. The lens was too small. As a result, this method of combating piracy didn't take hold.

When the age of the CD arrived, piracy slowed down a bit as CD burners were expensive.

In addition, the volumes of computer hard drives did not allow to completely copy all the information from the media.

First discs had no protection at all. Eventually, the price of burning devices dropped, and the problem resurfaced.

This is how DRM - Digital Rights Management - appeared.

The first technical way to combat mass copying was to slightly violate the audio CD standard. Most players skipped this and played the disc without any issues, while computer CD-roms were no longer able to read them.

Now DRM is a set of technologies for creating restrictions on the use of copyrighted equipment or software. Moreover, the restrictions apply not only to copying, but also to the resale of the original product.

These technologies are divided into software and hardware.

Software includes license keys, limiting the number of installations and activations, online authentication, and technologies such as those used by Apple Music - file transfer in its unique format that cannot be played on other players. As well as deleting downloaded music from the device after disabling the subscription.

A hardware solution is, for example, encryption of Blu-ray and DVD discs with the possibility of their decryption only on players with the same technology installed. But not on a computer drive.

As a more modern example, HP, which supports only original cartridges in its printers.

Complex solutions for software protection were developed not only by the developers themselves, but also by entire IT companies.

DRM helps protect content and technology. In order to acquire broadcasting rights and develop series and films, streaming services invest millions of dollars. And that's why it's so important to protect it all.

What are the ways to do this?

First, you can take care of protecting raw broadcast streams from source to broadcaster by applying High Speed Encryption (HSE).

And apply DRM technologies to transfer content to users' devices.

To ensure security, you can rent out some of the content. During the rental period, it will be reliably protected. But when the lease expires, access will be closed or restricted.

These technologies will also protect against screen capture and other interference with the video player.

If you have broadcast or distribution rights, you can also adjust and customize which countries can and cannot view this content using DRM.

It also helps streamers analyze which devices the content was played on and how long it took.

DRM also protects against hacking and theft of encryption keys.

What is a CDN

This is a system of servers distributed around the world, which helps users to get the requested information faster.

How does it work?

Let's say you don't use this system and your site is hosted on a server in the Netherlands. And in this case, all users living nearby will be able to view pictures, videos, and listen to music at a good speed. But the farther away the user is, the lower the download speed will be.

And if the site loads longer than 7 seconds, then the user will close it and never open it again.

Now let's imagine that you are using a CDN. In this case, a version of your website (cache) is saved on a number of servers around the world. So each user, wherever they are, will receive content from the nearest server.

The site loads quickly, the user stays with you. Since there are a lot of servers, the fault tolerance of the site increases. That is, in case of interruptions in the work of one node, the content will be given from the other. Users won't even notice the problem.

Using a CDN, a streamer retains existing viewers and attracts new ones, reduces the cost of maintaining the main server, increasing the fault tolerance and stability of the streaming site or its website used, as well as improving search engine rankings.

Video playback lag is reduced or non-existent, but don't forget about DRM. Let your instant access be protected.

This comes at the expense of High Speed Encryption (HSE). This is because from the event site to the viewer, the signal goes through different servers and transmission systems.

A certain key is generated to enable the viewer to view the video stream data. In order for this data to be protected, it is necessary to secure all encrypted keys, because they can also be forged and intercepted.

To prevent a catastrophe, it is necessary to take care of all this in advance.

For example, Callaba Cloud makes your content available worldwide with no interruption to streams and minimal latency. Callaba is available on the AWS Cloud, and AWS’s infrastructure covers 96 Availability Zones within 30 geographic regions around the world.

A wide range of available servers makes it possible to configure video delivery according to specific regions or countries.

A viewer's impression of what is happening is shaped by the IT and network infrastructure, since more and more people are choosing to watch a broadcast or physically cannot attend events in person.

When choosing a broadcast site, make sure it is secure. DRM, encryption and hardware security must be mandatory.

To see what you can do with Callaba, try our 5-day free trial on AWS.