Cyber attacks on OTT platforms and how to prevent them 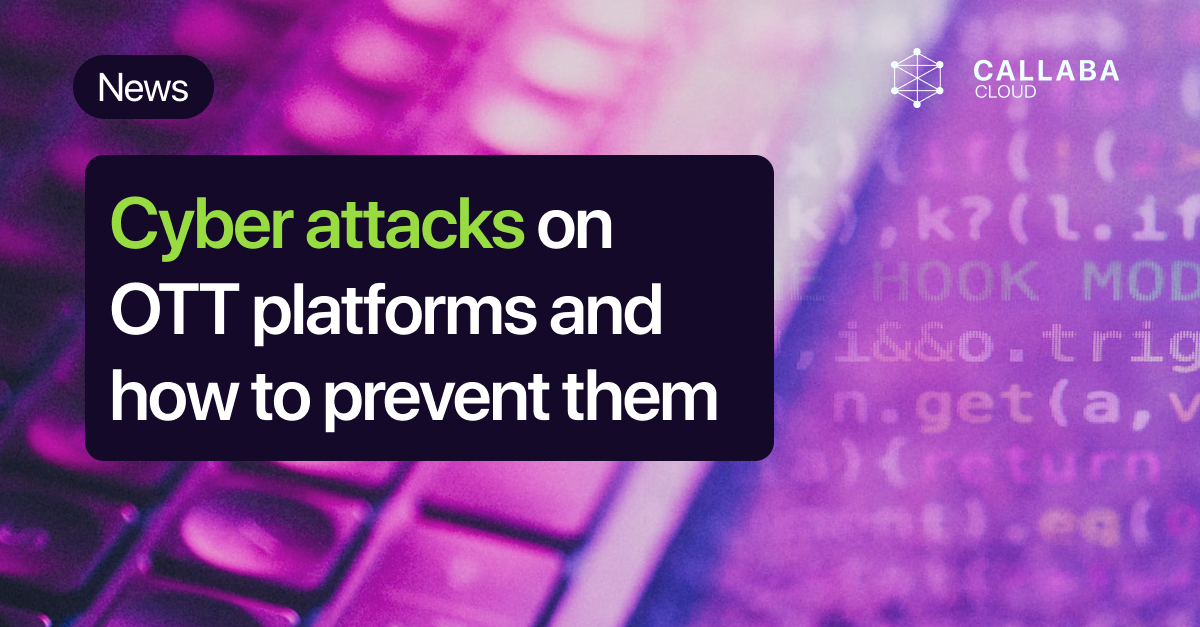 Netflix, Hulu, Disney+ - what do they have in common? Each of these services requires a subscription. As a result, you will have to use a payment gateway at some point.

Creating your own streaming platform requires you to protect your clients’ data, such as credit card numbers, date of births, names, and other personal information of your users. Databases containing confidential information are a magnet for hackers.

When data is leaked, your image is also leaked, and trust is lost.

Why do hackers need your OTT platform?

There are several reasons.

Every type of attack has a defense, and if you're planning to create a full-blown OTT, you need to be prepared.

For prevention, let's examine the technical details. As we will explain in this article, there are many different types of cyberattacks.

Most common types of cyberattacks on OTT platforms

Ranks number one in "popularity". Spyware, ransomware, and viruses fall into this category.

When malware attacks your platform, you lose control. It installs itself on your system and harms it.

What do these programs do?

According to Muvi's blog, statistics indicate that the number of attacks is declining.

There have been approximately 9.9 billion malware attacks globally up until 2019.

Malware attacks declined by about 5.6 billion in 2020.

As of 2021, there have been even fewer attacks worldwide. It was already an average of 5.4 billion.

How to avoid an attack?

In this case, the usual care and concern for your devices will save you. It consists in not following malicious links, even if their address looks very useful here and now. You can also entrust antivirus protection.

It is possible for detractors to compromise your brand by sending your users an email with your logo and some information that will encourage them to interact with the message.

They can say that the previous transaction failed due to an error and ask for the card details again.

Using the details received, the attackers will be able to withdraw the whole amount that will be in the account.

Muvi provides statistics on such attacks. Approximately 15 billion spam emails are sent worldwide every day, according to them.

A two-year study found that 83% of organizations worldwide were targets of phishing attempts.

The data also suggests that the number of attacks of this kind will increase. In 2022, that figure is 6 billion.

Time of dispatch is an important factor. Having calculated it correctly, attackers use urgency and imagined timeliness to lull the vigilance of their potential victims.

Phishing involves malicious links, attachments, and fake input forms posing as those of the organization that the phishers are pretending to be.

To keep your users vigilant, remember to include a reminder message in your regular emails that you, as a company, do not need personal and financial information, and if they are asked to share such information, then this is a sign of fraud.

The theft of passwords is usually carried out by experienced hackers. Strong passwords require complex encryption algorithms to be stolen.

If your password is simple, it can be guessed using programs such as Aircrack, Cain, John the Ripper, Hash at, etc. It's clear that there are many crackers, so it is important to encourage users to choose complex passwords.

There are three types of attacks in this category :

Discard logic and easy memorization. Force your users to generate strong passwords combining letters, numbers and symbols in a complex way. To do this, you can make a number of conditions the password has to match and disallow creating passwords that do not comply with the rules. You can also suggest auto-generated passwords.

Also, remind your users to never use one password everywhere.

With an MITM attack, the traffic destined for the router passes through an additional link. Using this additional link, an attacker can both intercept traffic and modify it.

To perform this attack, the attacker must be on the same network as the victim. This means that you can be attacked in this way through Wi-Fi.

35% of threats are MITM attacks.

1) DNS spoofing. Cybercriminals create websites whose domains are similar to those of the websites the user accesses.

2) HTTPS spoofing. When you enter a site as HTTPS, it is neatly redirected to a fake site with an HTTP address. As a result of this transition, third parties get access to the data.

3) Tracking devices through passive listening. When an open access network is used for streaming, everything that passes through it is intercepted.

4) Theft of cookies. As passwords are stored in the browser, this is easy to do right from the browser.

Use a VPN for everything. All your employees, especially those who communicate with customers, should use a VPN.

You can also regularly remind users about information security, in the mailing list or using push notifications.

An attacker injects arbitrary SQL code into your request, and now your database is being manipulated. Cybercriminals can access and delete any data in this way, easily hiding their identities.

In 2021, this type of attack was the third most serious cyber threat in the world, with 274,000 SQL injections detected.

The SQL language was designed to work with databases. It is a structured query language. The attack uses an SQL query to interact with the target platform, read or change information, up to shutting it down completely.

There are two ways - regularly scan the system for leaks, and check all user inputs before accepting them.

Dos and DDos attack or denial of service

In this attack, the resources of the channel, the communication equipment, the server, or the application are exhausted. This attack prevents your users from accessing the platform because hackers disable functionality available to them through a variety of attacks.

There may be a failure on the part of the Internet connection provider, or at the junction where the operator's network meets your hosting or dedicated server. The point of failure may be in the security system in the firewall, although firewall is supposed to protect the system. Problems can also occur on the server side.

Last year, DDoS attacks doubled. There was an increase of 67% in ransom requests. Attacks on applications have also evolved.

Attackers flood server-side traffic gateways with traffic to cut off your users. The second method is to send data that causes the application to crash.

Use a network with multiple CDNs to weed out pseudo traffic.

Cryptojacking is a type of cybercrime where a criminal secretly uses a victim's computing power to generate cryptocurrency.

This type of attack is on the rise.

Cryptojacking accounted for 86% of attacks on cloud platforms in 2021, according to Google estimates. Cisco revealed a year ago that about 70% of its users had been affected by this type of malware.

How does this happen?

This usually occurs when the victim unwittingly installs a programme with malicious scripts which allow the cybercriminal to access their computer or other Internet-connected device. This can happen by clicking on an unknown link in an e-mail or visiting an infected website. Programmes called ‘coin miners’ are then used by the criminal to create, or ‘mine’, cryptocurrencies. This type of attack can affect both the ordinary personal computers and powerful servers used by companies for their businesses.

If you have an IT team, make sure they know how to detect and defuse these types of threats.

Before you create your streaming site, make sure you learn about these threats. If your costs exceed your income in a situation where you need your own streaming platform, you can use the ready-made Callaba Cloud solution.

We ensure the security of your content. At Callaba, we use several encryption methods to help keep your sensitive data safe as it travels over the network.

You can also set up password protection for your streams to ensure that only the people they are intended for can access them.